How Much Did Han Solo Owe? 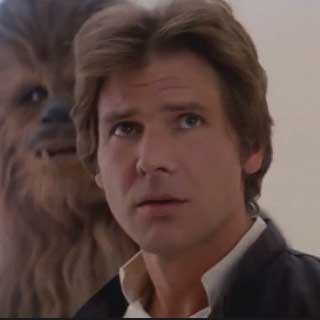 long time ago, in a galaxy far, far away, there was a smuggler named Han Solo. You may have heard of him. He became famous for his actions in the Battle of Yavin and several incidents after, but just prior to that monumental event, he was running Glitterstim Spice for a Hutt cartel. An incident just weeks before the famed battle had far reaching consequences, not just for his life, but for the course of the Galactic Civil War.

What is known for certain is that at some time within the two weeks leading up to the Battle of Yavin, Solo's ship, The Millennium Falcon, was boarded by imperial customs agents, and he was forced to dump his entire shipment of spice, the property of the crime lord Jabba Desilijic Tiure (Known Aliases: Jabba the Hutt and "The Bloated One" [but never to his face]).

We know that Jabba expected Solo to pay him back for the value of the cargo and that he sent a bounty hunter named Greedo to collect. Solo intended to pay with the proceeds from a charter (A venerable Jedi, a boy, two droids, and no questions asked), and based on the amount Solo was willing to take for the charter ("Ten thousand, all in advance.") we can surmise that his debit to Jabba was no more than 10,000 Imperial Credits. The fact that his passengers could only pay him 2000 up front resulted in Solo having to "fry" Greedo. Eye witness accounts differ on who fired first.

A subsequent meeting between Solo and Jabba was conducted on better terms, and at that meeting Jabba agreed to give Solo enough time to complete his charter and get paid, and in return, Han agreed to pay an extra 15%. Based on the time of travel between Tatooine and Alderaan, and the time to collect his reward, as well as the customs of loan sharks, we can reasonably assume that this 15% interest was a straight add on for a loan with a duration of one week. We can also assume that if not paid within the week, the interest could be expected to compound weekly. Fifteen percent per week equates to an interest rate of (15 x 52) 780% per annum. But, what is the APR with compounding? 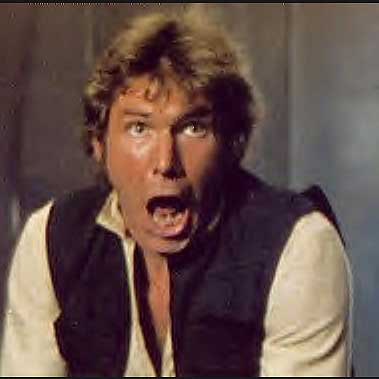 To answer this question, we can use an equation, or to make things easier, a tool (such as the Nortridge Loan System) to calculate the compounded interest over one year and compare it to the interest without compounding. Non-compounded interest on 10,000 at 780% would be 78,000 Imperial Credits. Entering a loan with a 1-year term, at 780% rate with weekly compounding, the loan system returns a payment on maturity of: 14,368,089.43. Of that, 10,000 is principal, so we can state an APR of 143,580%. (Jabba, like most loan sharks and crime lords is not subject to the Truth in Lending Act and did not need to disclose this Annual Percentage Rate.)

Now, 14 million Imperial Credits is what Han Solo would have owed if he had gone back to pay Jabba the Hut after one year. But he didn't go back. Instead, he participated in a fighter assault on an Imperial Battle Station, and then went into hiding for the next three years with a cell of the Rebel Alliance. His debt, at the time that he was captured by the bounty hunter Boba Fett: 29.6 TRILLION Imperial Credits. And once again we prove that Compound Interest IS the most powerful force in the universe.

A few closing points of interest.

Editors Note: In addition to being a rock star product manager, Aaron is also a enthusiastic Star Wars fan. In fact, during the editing process for this blog post, we learned that the next Star Wars movie will come out in December 2015. It will be the first time a Star Wars movie is being released in a month other than May. Aaron is a bit distraught.